skip to main | skip to sidebar

One Bike at a Time

Operating out of a vintage bright yellow house with a sign on the front in large black and red letters, it's hard to miss Bike Works when roaming around Columbia City. If you don't know about Bike Works, on the surface it can seem like they merely sell used and recycled bikes. Cool enough, right? But it's the profit they make from selling bikes to the public that funds the beating heart of Bike Works. 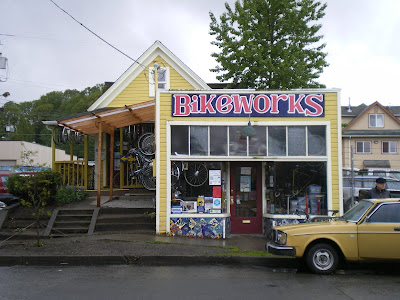 Founded in 1996, Bike Works is Seattle's only non for profit community bike shop, and they are primarily focused on supporting youth programs. Their most popular program is their 8-week Earn a Bike program where youths, ranging from ages 9-17, are given a used bike and told to strip it. “They get really excited about demolishing a bike,” says board president, Bill Lippe, who is a retired brain researcher. Every once and a while the door to the classroom opens and bursts of laughing and the sounds of clanking tools erupt from the room.

Over the 8 weeks, the students learn how to completely overhaul a bike and assemble it back together. In order to earn their re-assembled bike, along with a brand new helmet and lock, they must accumulate 18 hours of community repair time in the shop. “These are the tools to accomplish youth development and empowerment,” says Lippe as he shows me Polaroids of smiling kids who have graduated from the program. "This camp changed me by allowing me to know what is possible for me!" says Travis, 11, as quoted in Bike Works annual report.

Once the youths have gone through the program they're welcome to come in any time during drop-in hours and work in the shop repairing their bikes or others. Lippe tells me that one kid built eight bikes for his friends and family just during drop-in hours. Last year 276 youth served in one of their many programs and nearly 2,400 hours of community service were logged by youth. 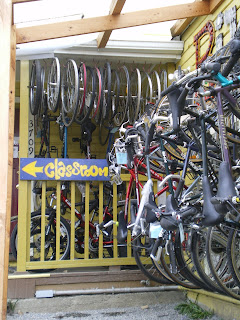 Stepping into Bike Works can be a little daunting. There are bikes everywhere in the tiny shop and house: on the ceiling, in the back of the house, stuffed in the attic and one cannot escape the strong odor of rubber in the air. Smells like work. As customers move in, we all shuffle around like clustering into an already brimming elevator. Space is not wasted here and neither are any components of a bike. 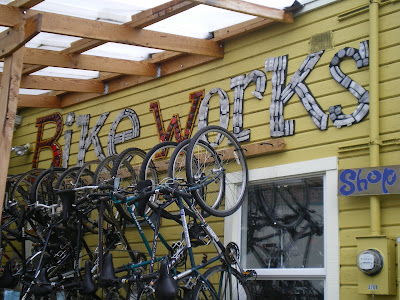 “Our goal is to keep as much as we can out of the landfills,” explains Lippe. Bicycles and parts may find new life in the store to be sold, donated to Seattle based Alchemy Goods, where they make messenger bags out of recycled rubber, or donated to Ghana to support the Village Bicycle Project. Last year over 1,400 bikes were sent to Ghana. I'm impressed. The last time I owned a bike it probably had a banana seat and pink streamers on the handle bars, yet I find myself falling in love with this little bike shop doing big things. 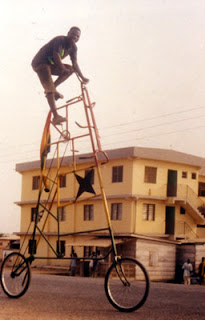 Stepping into the kitchen with Lippe, I meet Dara Ayers, the executive director of Bike Works. “I'm not normally in the kitchen cooking,” she jokes as she stirs pasta for the strategic meeting dinner later that night. Trying not to be distracted by the delicious smells of pesto, I ask them how Columbia City plays a part in their operation.

“What's happening, Columbia City's really grown, it's gentrified, property values are going up, it's going to be changing substantially in the future. That's why we're involved in the strategic planning given that these changes are going to be occurring—ya know what's our future? What do we have to do,” explains Lippe.

As the neighborhood changes so do its needs and Bikes Works is motivated to serve underprivileged youth. Lippe explains that families with little resources are moved south so they have had to expand their outreach programs and are even considering changing locations.

“The majority of youth come from this general south end Seattle and the focus of our outreach is in this area,” reiterates Ayers.

As I help them set up chairs and move tables for the strategic planning meeting, I wonder how this would impact Columbia City if this little organization with a big heart would leave the neighborhood. But for now, it's the place where many kids find themselves after school and why you might see some kids riding around Columbia City with pride on their faces and on bikes they built. 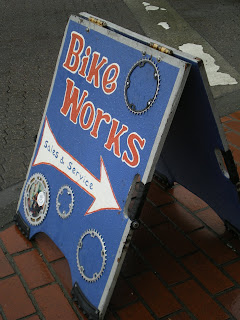 May is National Bike Month. Celebrate with these Upcoming Bike Events:

Jennifer
Hi. I'm Jennifer! Here are my passions...cooking and writing and this is me exercising them. I hope you enjoy both!